===>ONE
One (1) is just a number until you become it.
One in 1000 who reacts differently to a standard drug.
One collapsing after a marathon when 20,000 others don’t.
One taxi driver killed by a careless speedster in a red Ferrari.
One catching a bus home in Delhi and dying after a vicious gang rape.

One trying to understand how she suddenly became embroiled in her own medical drama.
One who knows that God’s plans for her are filled with hope despite adverse external circumstances.
But for a while there, my focus was simply on taking in enough air—the simple act known as breathing. 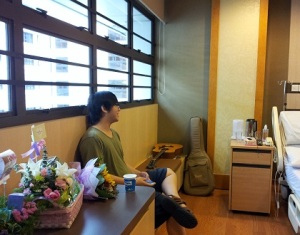 That’s the realisation that hits me after my close brush with physical death. When I’m finally allowed to move freely, I sit on the window seat of my hospital room, peering up at a patch of sky—a simple pleasure that I missed during my week in the ICU and High Dependency Ward (That’s my son Caleb in the photo). I’m focusing on breathing, trying to gradually wean myself from the ready supply of oxygen by my bed. I think to myself—the ability to breath is such an undervalued blessing! And it’ll probably remain an underrated activity by most until a medical crisis hits. Then, as it did for me, we’ll realise breathing is the primary process that separates life from death.

The Bible, God’s Word that will endure forever, tells us right at the beginning that, “The LORD God formed man of the dust of the ground and breathed into his nostrils the breath of life; and man became a living being.”-(Genesis 2:7) “Surely every man is a mere breath.”-(Psalm 39:11b)

The rhythmic act of breathing which used to be so effortless occupies my thoughts round-the-clock.
With the trauma behind me, doctors and friends reveal what they were thinking in the initial days.
“You could barely speak. Then you managed to utter words. And now sentences.”
“You were so pale. It reminded me of a funeral wake.”
“Your skin was colourless. Your lips were bluish.”

That last statement triggered a memory of what my late mum had told me about my birth. I was premature, hurrying into this world at 7 months. I was the size of a “niao xiù”—Hainanese for mouse (老鼠 Mandarin). I was bluish and too weak to breathe. The nurses rushed me somewhere to tend to me and left her on a bed in the hospital corridor for hours, worrying about my survival. After I was allowed to go home, I managed to make up for lost time, steadily growing to the correct weight at the different stages of development. ALIVE & KICKING. Then & Now!

All Because Of Jesus – Fee
Lyrics/Music: Steve Fee
“Giver of every breath I breathe. Author of all eternity. Giver of every perfect thing. To You be the glory!”

===> WATER
What a luxury it is to be able to reach for a drink of cold water or juice any time I want
—that’s what I learnt during my long hospital stay. During the first few days, I was on a drip but my water intake was strictly rationed apparently because the body produces copious amounts of fluids under stress and there was concern over possible strain on my lungs and kidneys. I appreciated the need for the water rationing and was happy to cooperate, but my thirst increased to the point that I requested and was allowed to wet my dry lips a couple of times with squirts from syringes of sterile water.

Food was not on my mind at all even though the last meal I’d taken was three or four days ago. The reason for the enforced fast—which I was comfortable with as fasting is an important spiritual discipline for Christians—was that at any time, I might have to undergo another surgical procedure. Once the all-clear had been given, my first meal at SGH was a bowl of oatmeal carefully spooned into me by a kind nurse late at night. She was genuinely pleased that I finished eating the food that she’d personally prepared.

Not surprisingly, once I was moved to my private room, one of my first requests was for ice to be added to the jug of drinking water placed beside the bed. Those who know me well would have heard this tale from my primary school days—one stormy morning, I had been thoroughly soaked on my way to school and the teachers offered me a hot drink and a change of clothes, to which I replied, “May I please have a cold drink instead?” But they insisted on giving me something warm, so I had to down a cup of hot Milo! 

===> HELP
“Carol, you must ask for help when you need it. I know you don’t like to trouble people, but you must do it. It’s good that your siblings and you are very close and that your sister Adeline has invited you to recuperate at her home where there’ll be people keeping an eye on you all the time.”

That counsel and comment came from a colleague who’s become a good friend. The reality is that I run to God for help all the time, for He knows me inside out, “loves me with an everlasting love and draws me with unfailing lovingkindness.” – (Jeremiah 31:3). When it comes to people, however, it’s not quite the same. Perhaps it stems in part from my adventurous and independent childhood days exploring nooks and crannies in my estate Serangoon Gardens, checking out crumbling alleys behind houses, even venturing into monsoon drains—children are blissfully unaware of potential dangers like flash floods sweeping them away!

The earlier part of my hospitalisation taught me what it’s like to be fully reliant on external help for my physical needs. In the Intensive Care Unit and High Dependency Ward, every aspect of my day-to-day care was dependent on the nurses, so I was thankful for their professionalism and gentleness. Many offered encouragement and one even took the time to comb and tie my hair. Cleaning bodies and clearing waste is the part of nursing that may well deter those without a true calling.

===> PHYSIOTHERAPY
My first physiotherapy session was very simple. Gingerly slide off the ICU bed, sit in a chair and move my arms up and down. Then raise the lower legs to knee level, one at a time. This took place a day after the IVC filter had been implanted and the risk of clots in my legs travelling upwards had been minimised. I was shocked at how wobbly my movements were after just two full days of near immobility. Next, the requirement was to walk a full circle around the High Dependency Ward. By my final session, I could move up and down the long corridors a couple of times with the physiotherapist beside me and my Heparin drip (an anticoagulant to thin the blood) attached to a portable stand.

Tips for after I leave the hospital include stopping to rest if breathing becomes laboured while taking a walk. Take deep breaths when tired or feeling the strain. Troubled by breathlessness? Just breathe in through the nose and out through the mouth, creating an O shape. Resting arms on pillows will relieve breathlessness.

Once my hands were free from assorted drips and catheters, I was allowed to shower, but the brief exertion left me winded and sweating, which defeats the purpose of a refreshing wash! Even sitting up required effort. Never had I been more conscious that when I lean forward, my breath catches in my throat. Crossing my legs seemed to impede the flow of oxygen, causing a little discomfort, a mild dizziness. The young ward doctor with the sweet smile pops in so I ask for his advice. Sitting up straight or standing up expands the diaphragm, and when lying down, try sleeping on the front like a baby as the abdomen will drop.

===>OXYGEN
The bedside oxygen supply became a security blanket for a while, helping to banish memories of the double SHUTDOWN at my condo and at KK Hospital’s x-ray room when I just couldn’t breathe! I’m so glad Dr Charming understood and proposed a 24-hour “oxygen-free” trial before I left for home.

With the supply turned OFF, I decided to be adventurous and ventured to the ground floor (accompanied as advised) for a s-l-o-w walk to the sandwich joint. It was liberating to be free from encumbrances, save for the hospital wrist tag, marking a significant step towards restoring my life to normalcy.

===>SONGS
3 songs that I listened to over and over again in my hospital room.

主你是我力量 (Lord, You Are My Strength) – 赞美之泉 (Stream Of Praise)
Lyrics/Music 詞、曲：曾祥怡 (Grace Tseng)
“我的诗歌、我的拯救、祢是我患难中随时的帮助. 众山怎样围绕耶路撒冷、祢必围绕我到永远.”
“主你是我力量、主你是我高台. 坚固盘石、我信靠祢必不动摇.”
“Lord, You are my Poem-Song and Deliverer, my ever present help in time of need.”
“My Strength, Refuge and Hiding Place. My hope and expectation are in You.” (Psalm 18:2; 125:1-2)